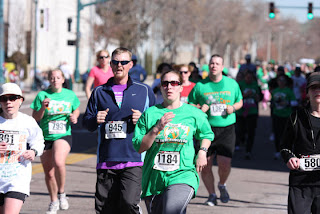 I've heard of these strange things that show up on running blogs (I mean like non-waddling blogs) that discuss and describe these things called "races."  Apparently they are big glorified group runs where a bunch of people stand really close together near a "starting line" for thirty minutes while the police clear cars off the street.  Then an announcer with a sense of humor that has a physical range of...himself, starts telling jokes when everyone would rather be running.  The everyone in this case are mostly wearing green, with green hair, green man-skirts, green beer kegs serving as hats, and green shamrocks plastered....everywhere.  Then a gun is fired, and the mob starts shuffling, and stopping, and shuffling some more.  Then a strange mob mentality breaks out, suddenly the people are no longer running for "fun"  (seriously people do that?)  or to get a good time, or as a pretense to drinking more green beer, suddenly the mob is trying to escape a burning building, or running to flee the guy in the green man-skirt because they all start sprinting as if their lives will only be saved by excessive speed.  If I were there I would utter a long sigh and keep waddling.  Waddling as I get passed by the lady in a green wig, the guy wearing a kilt and nothing else, the pack of seven year olds, the "serious" runners who cut in front of everyone cus they HAVE to get to the front, and of course the guy in the plaid polyester green man-skirt.  After about five minutes of running the mob is strung out, and if I were there I would start passing people.  Not because I would be fast, but because the towering inferno has been escaped, there are pubs serving green beer along the course, and my waddling is nothing if not consistently paced.  Then the "race" would consist of more running, me trying to "pick it up" for the last mile in order to make my goal time, passing some more people, trying to keep up with the guy carrying the POW/MIA flag, and crossing the line.  A normal "race" would not consist of me making the goal time, but in some imaginary worlds (like on Saturday) it does happen.  Then the "race" consists of me inevitably seeing someone I know from a previous life and catching up.  Watching the guy who finishes in an all out sprint and an overall 5-k time of fifty-five minutes.  Getting my money's worth from the bagel and fruit table, and wandering home.  This apparently is what makes up a "race".  If I put a "race report" on my blog, it would describe something like that.
I have inserted a picture of a "race".  I'll let you guess who the hypothetical waddler is.  Your hint is, he's the one in the fuzzy background who looks like he is about to die and is praying he doesn't get chicked by a walker.
438 1.0 in 9:12.
439 3.1 in 29:30
Third time I've done the St. Patrick's Day 5-k!  Only ten more minutes off my time to get my PR from a previous life!
Email Post