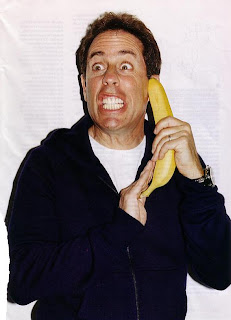 So the part I didn't mention before, was that after the day of six miles of running, a couple of hours of hiking, and helping a friend move for a few hours, the knee was barking, loudly. Imagine that?
On to the doctor today. I'm assuming its a nice overuse-type injury that they will tell me to stop running for, and I will say something like, "uh yeah about that."
I saw a really interesting link to an old lifehacker post that seemed relevant to the whole streaking thing. Its about "Jerry Seinfeld's productivity secret." Basically it outlines the idea that instead of trying to sit down and write jokes for hours on end, his goal is to write something every day. He gets a big calendar, and each day that he sits down and writes at least a few jokes, he makes a big red 'X' through that day. Then after seeing the Xs Jerry states
""After a few days you'll have a chain. Just keep at it and the chain will grow longer every day. You'll like seeing that chain, especially when you get a few weeks under your belt. Your only job next is to not break the chain."
This is exactly what encompasses the streak. Personally after having done it a little while, I don't think doing a running streak is that big a deal, but occassionally people will ask, "how do you do that? or why do you keep going?" My response is, I don't want to break the streak. The logical part of my brain says, that just makes you an obsessive/complulsive fool, (the logical part isn't very friendly sometimes) but I think its somehow part of building new and more productive habits. If you can somehow make it part of your routine, then it becomes much easier, and you feel more compelled to keep going. Stopping after three days would have been REALLY easy. Stopping after 520 is much harder... /endpersonalproductivityspoutings

Tom said…
/jack nicholson voice
"You make me want to be a better man."

Seriously though, for someone that hates running as much as I do to seriously be considering trying out a daily running regimen is something! All because of you!

Oops, I said all that in a Jack Nicholson voice.

Moriah said…
Just in case you ever wonder if I think well of you, I do. I know (because you have said so) that the whole streak thing seems to have little true meaning sometimes, but I have seen you changing into your running clothes at 11:30 p.m. with weariness in your face and shoulders, and I know that it would be much easier to climb into a warm bed. But you don't because you want to keep going and really that is all that God calls us to. To keep going even when the going makes no sense and the way seems dark and cold, yet your going makes it easier for those coming behind you (and there are some coming behind you.) We are better for the one ahead who has blazed the trail and left us a challenge to meet. I love you. I love you deeper because you keep waddling. (I love you truely, too :)
June 4, 2009 at 4:04 PM

try running said…
I think I need to start a shutterstock shot submission streak...I wish I had 520 of those under my belt.

Nitmos said…
I tried to start a streak where an anonymous stranger gives me $100 every day. It didn't even get off the ground. You're right, it was easy to quit after the first day.
June 9, 2009 at 2:22 PM