It was a dark and stormy night...

...and I hadn't run yet. It was getting late. The familiar weight of that pressing voice with its repetitious question was getting heavier and heavier. "Have you run yet?" Time to go, my mind replied and I made preparations. It wasn't the common Colorado residential run that I would be taking in this evening. Instead I was temporarily relocated in the heartland of rural Iowa. Monroe County in July is not normally anyone's idea of a good time. The heat and humidity served as strange companions to myself and the rest of my family who had just left the high plains of the West. It was worth it however to make the trip, visit some of the rest of the clan, and seize the chance for a few more days out of the normal routine. 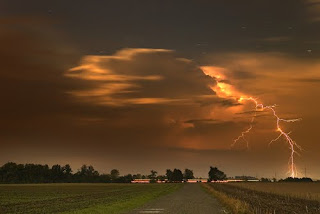 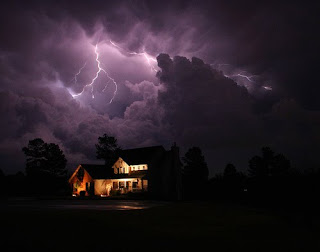 Following this I ran up a hill and saw a solitary structure in the distance through the trees and wind and lightning. It was a farmhouse. You know the farmhouse, with the crazed inhabitants waiting for shirtless runners to come by at 11:00 pm and perform all manner of strangeness upon? The strategy for this situation is obvious. I would run like a ninja! Silently my feet moved over the gravel and dirt. Never in the history of running has a 200+ lb man over 6'4" tall moved so quickly and quietly over such uneven ground. In my mind I was a whisper, and I knew I had to be. If any sound emerged and upset the horrific denizens of the farmhouse, only my freaked-out and ever imaginative mind could behold the outcome. I clicked off the headlamp (probably should have done that before I stared directly into the front window) and raced by. Through these epic skills of stealth, I narrowly escaped certain destruction at the hands of those maniacs in the farmhouse.
The mind is a funny thing. Its ability to imagine and visualize things, even imaginary things is immense. And at this point in time, my mind was motoring through bizarre stories and images like a runaway freight train. One of the ones that was stuck in my mind was related to an actual event that had happened a few years ago at this same house in Iowa. It had been Christmas and of all things my Mother said she needed help with a possum in back of her house. Perplexed I asked further and she said there was a rabid, half-starved possum right outside the back of her house and she was hoping I would go shoot it with a shotgun and put the creature out of its misery. I found this a little hard to believe, but being the dutiful son I loaded the shotgun and proceeded to the back door. Did I mention it was dark outside? Just as I went to open the glass, sliding door, the white face of a bedraggled, evil, sick looking possum pressed itself up against the glass. I did have the safety of the twelve gauge on, thankfully for the door. I wound up putting the creature down, it was clearly diseased and very sick, but it was a somewhat disturbing mental image of that face, looking at me, even in death seeming to say, "What have you done?"
The rapid rush of mental images and memories was interrupted at this point. Ahead of me along the road, I saw a very black shape. It was near the side of the road, and my logical mind said, "tire" and "log". The logical mind was soothing, calming, of course things appear on the road. This is what happens. Objects, nice simple things show up on roads all the time. This is normal. Then, as I ran closer the shape morphed. Then the shape moved. Then the shape moved towards me. The logical mind had no response. As I got closer (and started drifting to the other side of the road) I realized this was no longer in the norm of roadside experiences, (you know like a nice, pleasant hitchhiker with an axe in his backpack, or a driverles semi truck forcing you off the road)
IT WAS A POSSUM.
It was at this point that the logical mind went off cowering in some deep dark corner of my brain. As I ran by, the possum stopped and stared. It turned its head quickly to keep up with my blazing speed as I ran past (right, you know what I mean) maintaining its burning glare, with its illuminated eyes of gleaming blue burning into my soul. It was clear what was happening to me now. I was being stalked by a ghost possum! 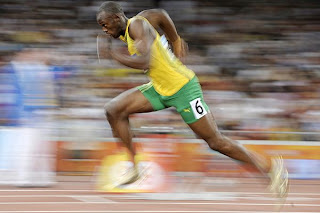 In my return to running I have not normally engaged in a lot of speed work, however at this point my motivation to sprint was at an all-time high. All-out exertion down the lonely dirt and gravel road seemed like an excellent training choice for the forseeable future. It wasn't until I had sprinted past the ghost-possum farther down the road, and could no longer see those terrible blue eyes and white, pale face (still sprinting backwards in the Crazy Ivan position) that I realized the true desperation of my current situation. Not only had the tormented form of this diseased animal I had killed come back from the grave to haunt and torment me, not only was I surrounded by all the elements of any freak-out horror movie, storm, darkness, strange sounds, crazed cicada singing, howling wind, coyotes or more likely children of the corn with farm implements stalking me, and farmhouses of doom, there was still one painful truth that I had only now realized.
I still had to turn around and go home.
I remember very little of that return. Of the fact that I set a PR for the distance covered there is little doubt. Mostly I remember pulling into the driveway, breathing heavily, foregoing any stretching which might prolong my time outside, and striding rapidly to the front door. For some reason I paused as I reached for the front door. There was an attempt to regather myself and prove my manliness. I reached down, put on my shirt, and intentionally stayed outside at least a full three seconds longer than I had to as I looked furtively about. As I gathered my thoughts and my manliness, my logical mind made one last comment as I strode powerfully and with purpose in through the front door.
"No one saw that, right?"
Email Post
Labels: iowa lightning manliness possum running wind