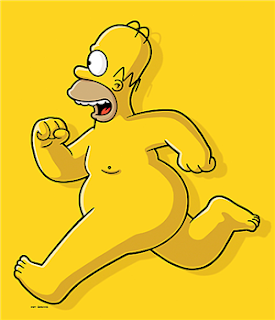 "If something's hard to do, then it's not worth doing. "
--Homer Simpson
I've been seing some posts on the mental aspects of running lately. The fact that I've been thinking about such topics myself only reinforces the idea that running blog-o-sphere has a hive mind and thinks about the same thing, all directed by the evil alien overlords, but I digress. Thus my mental running thought of the day and challenge appears here:
Do something hard today.
Why?
Because it's hard.
I like this idea. Its simplistic and unoriginal, but it works for me. It seems to me there is way too much stuff in our world that is soft, and easy, and mundane. I know that I get washed away in comfort and niceties that I am surrounded by. At work I sit in an $800 chair (there are a thousand of them in the building if any chair thieves are interested), I drive to work in a car that has heated seats and air conditioning, I go home to a house with comfortable chairs, nice squishy carpets, and a feather soft bed with massive pillows. For my job, I don't dig ditches, or build things, or lift heavy objects. I write emails, and I think (that is hard sometimes, really), and I stare at a computer screen. Where is the challenge? Where is the impossible goal? Where is the blind leap of faith across the bottomless chasm? Thus I say to all of this, do something hard. When I was thinking about running every day for a year, it came from asking myself the question, "What would be something that would be really ridiculously hard/impossible for me to do?" Then I came up with trying a streak. Then I said, why not run a marathon? Now I'm saying, albeit a little tentatively, why not run an ultramarathon? For those of you who know me, those are all RIDICULOUS things to think, at least two years ago.
The benefits are huge. Yes there is the feeling of accomplishment, the success, the fame, fortune, and hordes of cash being thrown your way. However I think the biggest benefit for me is that it breaks the cycle. The cycle is that moirass of mediocrity and mundaneness which creeps into our lives if we let it. Its a vicious pattern of doing just enough to get by, accepting no challenges, never risking failure, that leads us to that final destination of our will, and abilities, and muscles? atrophying so badly that we don't even have the capability or energy to try something different.
So. What are you going to do today? What "hard" challenge are you embarking on, or are struggling through right now? Don't settle for the easy, the known, the already in my grasp things. Do something hard. And enjoy it!
/endphilosophizin'
617 1.0 in 10:23
618 2.35 in 23:58
619 1.0 in 11:01
620 1.0 in 12:50
Email Post

Being Robinson said…
wow an ultra? awesome. and i agree, i LOVE running for the challenge of it. and for the fact that not everyone does it (esp in the midwest!) and i like the Homer pic, that made my day. As for the challenging thing I will do today? Not cry or whine because I'm on crutches and can't run the Wichita half next week :)
September 11, 2009 at 10:14 AM