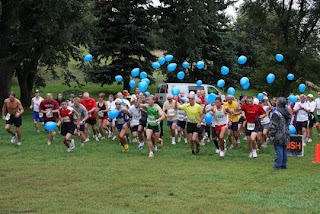 There have been other noted instances of runners doing doubles. However, I think it is clear that none have been quite so ignominious as the result I put up this weekend.
Brace yourselves now, in one simple morning, I ran the one mile kids run AND a 5-k!! Schnikes! That ultramarathon training is really paying off! /endsarcasm.
Right so the whole family jumped into our local running club's annual free race. A good time was had by all. The six year old ran an 11:45! and finished third overall. The four year old ran 12:30 and set an age-group record! The two year old, ran the whole way, waved at everyone within a mile of the trail, and set an age-group record (she was the first two year old to do it, lol) finishing in 19:11ish...
The family name and honor had been hoisted high! Then there was me. I hadn't planned to run the 5-k until the night before, but since it was free, and I do love me some free stuff...I decided to do it. Its a nice little course, and even though I had run the night before I decided to "endure a little suffering" and push the pace and race it.
Well this of course is when the humiliation comes in (you know, once I start running). I've talked before about my experiences being "chicked" but midway through the course I think I set some new records...
First of all, I got passed by the "Silver Bullet". 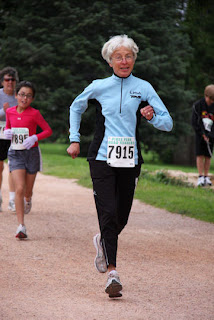 This is the name I gave to the 64 year old grandma that went zooming by me. You know this grandma. She is the one talking to and encouraging everyone in sight, never pausing for breath because honestly she hasn't broken a sweat yet. I tried to keep up with her. Big mistake. That lasted for about two minutes and then she pulled away. Out of sight. Its kind of like that Coors Light commercial where the train goes zooming by all those people, except instead of feeling refreshed and covered with ice, I felt more like a prune thats been squished on the sidewalk.
This would have been bad enough, but the "chicked" streak continued. A few moments after Uber Granny pulled away I got passed again. BY A NINE YEAR OLD GIRL! OK I know you are all accusing me of hyperbole now, but I looked up the race results, hoping that maybe she just looked REALLY young and was in college, you know on the track team? She's nine. (In the background behind the Silver Bullet.)
The string just continued. In succession I was passed by: The Silver Bullet, the nine year old, another grandma, grandpa with a knee brace, and the dude who alternately sprints and then walks (UGHAREARARGH!). There may have been a few other "chicks" in there as well. All of this happened in approximately the span of two minutes.
Needless to say it put a bit of a damper on the the family fun. Nonetheless it was, as "teh wifey" put it "a PR for this decade". 28:15 which was 1:20 faster than the last timed 5-k I ran. I was happy about that. At least until I'm jolted by the image of the Silver Bullet waving and zooming away....
621 4.1 in 12:30 (with the 4 year old) and 28:15
622 1.0 in 10:59
Email Post
Labels: chicked doubledown race report silver bullet

Tom said…
yeah! The podrunner series is now more than 3 miles including the warmup and cooldown walks.

Chris said…
Hey, don't feel so bad. In my first marathon, I was really struggling at mile 21 when a 9 year old girl went flying by me. She ran the whole thing and beat me by several minutes.
September 15, 2009 at 4:36 PM