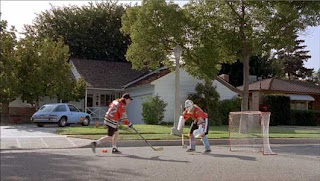 I don't really want to write this post. Its mostly just stupidity. Everything about it rings failure and abject ridiculousness. Nonetheless here goes.
I'm not a Jim Collins devotee though I have read a few of his things. I do like a term I've heard him use called a BHAG or "Big, Hairy, Audacious, Goal". So here's mine.
I want to run Hard Rock.
This is ridiculous. Yes. I know this. It is kind of like saying, I'm going to start at center for the Detroit Red Wings, tomorrow. Or I'm going to teach myself to fly by flapping my arms really fast. There is no chance of this. However I'm going to give it a try. Even if I fail, I think the trying will be good for me. Failing is OK. Failing at least means you are trying, right? Besides, I need something to shoot for, and why not shoot for the moon? (The moon on the fourth planet of Alpha Centauri in this case.)
Why do this? When I was thinking about starting running again, when I was pondering doing something hard, like doing a running streak, I ran across an article about the Hard Rock 100 trail race. I was amazed. I thought this has to be one of the most difficult things I could imagine. I told myself instantly there was no way I could do this. And yet there was some part of me that quietly, meekly said "I WANT to do that." So I say today in a temporal, fleeting way, in a post that I will delete tomorrow, Game On!
What will this require? It will take two to who knows how many years to accomplish. Here are my current required steps as I see them:
1. Be X-50. Where X = my current weight, I need it to be down fifty more. This is not an exaggeration. Considering I'm -50 since I started this running thing, it might be doable. It is definitely necessary to be able to run that far and have my body hold out.
2. Run a 50 miler. My plan was to try and do Rocky Raccoon in Feb. but with the back injury the training plan was thrown out. I'm going to look for, train, and do a 50 miler, hopefully in the spring of 2010.
3. Do whole body training. Its gotta be more than running. Maybe hit some weights, do some cross training, etc. Complete commitment to the goal.
4. Run trails. Run hills. Run mountains. Run for a long time. Some of that doesn't sound too bad?
5. Runa 100 miler. It has to be one from the qualifying list for Hard Rock. The audacious goal for this would be late in 2010. August? Leadville 100? Thats crazy. Just like everything else I've written in this post.
6. Enter the application for Hard Rock and win the lottery. Literally. Its a capped race and you have to get in by the luck of the draw. 2011 would be nice. Last year, having one ticket in the lottery meant you had an 18% chance of getting in.
7. Run the race.
Please have no worries. Tomorrow when I'm sick of and don't want to run one mile, this will all fade away. And you can just let it pass from your mind. Don't let the craziness disturb you.
However...I might have to listen to the voices...
Email Post
Labels: hard rock stupidity ultramarathon

The Boring Runner said…
First, I'm REALLY glad you had a waynes world picture here. That is the first thing I thought of when I saw your post title.

This sounds FUN. Sort of like having boston for a goal. The road would b long, but so worth it in the end.

try running said…
Don't do it.
It's too hard, and will probably not be very fun.
It's best to think smaller when making goals, so you don't get disappointed.
December 16, 2009 at 9:41 PM

try running said…
Now that I have attempted to stoke the fire with some sarcasm...
Alright!
I claim first spot on the crew.
December 16, 2009 at 9:44 PM

HappyTrails said…
RUN TRAILS - Yes! Couple thoughts: If you are going to go big, go really big! Some races that would be good lead up ~ Desert Rats 25M or 50M (Fruita), Leadville Marathon, Silver Rush 50M (also Leadville). Getting ready for it will be as much fun as trying for the big one, right?
December 16, 2009 at 9:54 PM

Vava said…
Awesome! You can do it!