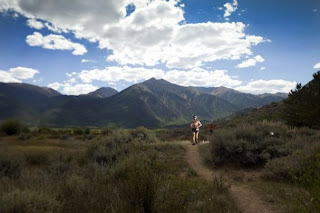 Well the goal has changed, the focus has changed, the practice has changed.
I'm no longer streak running for now.
It was a little bit easier to make that decision since I've had the flu for the last week (though I did run a few days with fever), but I think I knew I needed to do that. I'm satisfied with running every day for two years except for the three week back injury "break". That's not too bad for me. I made my original goal of making it an entire year, and though I was lazy and still haven't sent in my application for the US running streak association, I can still get on the "Retired Streak" list.
Now we're looking at a different goal. And that goal is on August 20th, 2010. I don't think running every day really helps me toward that goal, so that is the basic reason for the change.
Teh wifey aka the crew chief aka the fast runner of the family aka the coach has been working up a training plan. I think it will basically consist of a "base" phase of about sixteen weeks to build up mileage. The second phase will be a "strength" phase of about twelve weeks to maintain mileage and build up the overall body strength with some hills and such, and then a three to four week taper. I'm not going to get up to huge weekly mileage totals, mostly because I don't know that my body can take it. I'm thinking the max will be 80/week, which is just ridiculous saying out loud. Thats the general thinking about the training plan right now. There might be some marathon "training runs" or some longer runs in the hills to get used to doing what I will have to do to make it.
There, more boring goals/training/running/no more streaking talk.
p.s. Try Running you have haunted my sickness-induced dreams with visions of Billy Ray Cyrus chasing me....thanks a lot...
Email Post

Moriah said…
I am sooooo proud of your last two years and am excited for the adventure ahead.
January 9, 2010 at 10:28 PM

nwgdc said…
I oficially started a streak of my own yesterday. I had intended to start it on Jan 1, and forgot :)

But rest assured you inspired MY streak, so the spirit lives on!

On to PbVille! (I kinda want to do an event there at some time so I can buy one of those bumper stickers with the elemental abbreviation :)
January 10, 2010 at 8:33 AM

Chris said…
streaks come and go - getting the right training schedule is much more important. Good luck! I look forward to reading about your training plan and race success.
January 10, 2010 at 6:43 PM