So I ran a race yesterday.  Thanks to the kindness of a church friend, I got to join teh wifey and another friend on the second leg of the Pikes Peak Road Runners Winter Series.  Teh wifey was signed up for the whole thing, but due to our flu from a few weeks ago she missed the first race.  The Long series (does anyone really bother with the short series? hee hee) :)  increases from six, eight, and ten miles and then finishes with a 20k race.

I was going into this eight miler as a training run, and a chance to run in a race with teh wifey which doesn't happen to often.  Overall I felt pretty good, talked to a nice guy for about ten minutes (while running!), and pushed it hard enough throughout to make a goal time, which in this case was under 90 minutes, (finished in 1:29:28.)

Now this, as we know whenever we are talking about my running times, is not fast.  In fact for this race it is very slow.  In fact it is so slow that of 254 male and female runners I finished 243rd out of 254.  (I beat three guys total.)  Now how can I rectify the two facts that, 1. I in my own relative perspective met my goal time, and yet 2. finished in the lowest 4% of runners and in the last 11 runners AND the winner finished in half the time I did and and and and...

There are, by my own rough scientific approximation, 500,000 people who live in Colorado Springs.  Yesterday I ran faster thant 499,757 of them.  The four hundred or so who ran the "short" race all would have been disqualified for the eight mile race since they didn't cover the distance.  The other people who had nice runs in the Springs (you fast people know who you are) weren't on the right course so you are disqualified. That means on January 23rd, for the greater Colorado Springs area,  I finished in the top 99.99514th percentile of all runners for the eight mile winter series race.  That might be a little bit of silly warped logic, but it all points to one thought.  Celebrate your successes!  Even if you're like me (ok we know you're faster than that) and barely finish before they close the finish line, but you have a good run, and make your goal? Celebrate!  Too often I find myself discounting things, or rationalizing away any good things that are accomplished because I let "others" define the parameters of my success.  Well, not today.  Today we celebrate!  Quaff a Mountain Dew, let loose a hearty battle cry to the sky, cheer on Fulham FC,  then run three more miles the next day.  :) 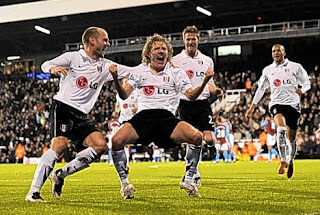 joyRuN said…
I used to get all bent out of shape about how much slower I am that the speed demons around here. But like you said, no matter what, I'm still faster than those who opted to stay home ;)
January 25, 2010 at 5:18 PM

HappyTrails said…
But what about people who decided to be tempted by delicious Lake Pueblo singletrack trails?...

The Boring Runner said…
Nice work! Frustrating that there were all of those rabbits out there - but it sounds like you math'ed your way to a good explination.

Break out that champagne!