So y'all are pretty funny.  You make me laugh, a lot.  The comments to my last post had everything a person could want, love, encouragement, and a nice get your rump in gear sentiment.  That pretty much covers it all.  It is also kind of funny because I hadn't meant it to come across as quite so negative and down in the dumps, but I guess looking back at it, that was the result!

Now on to my fun run report.  So one other reason that I had been a little behind on posting was that I was travelling last week, spending time in not-so-sunny San Francisco, California.  I've started taking the approach when I'm travelling of not reporting locations and times away, mostly because of fun sites like PleaseRobMe.com and the like.  I managed to get a couple runs on the hotel treadmill (the sounds being uttered by the cheap plastic thing made me think I was going to make it explode!), and around the neighborhood, but on Saturday it was time for the long run.  I looked for a route and found some suggestions on the San Francisco Road Runners site and found a neat course that went out along the water to the Golden Gate bridge and back.

It was a great course through some neat parts of San Francisco, including Fisherman's Wharf, Fort Mason, past Alcatraz and then winding up right at the base of the bridge.  The views of the Bay were really nice, there were a ton of running folks all about, there was actual sun out, and it almost got to the point of having fun running (almost, lets not get too crazy).  At the turn around point of the run on a fence below the bridge I noticed this... 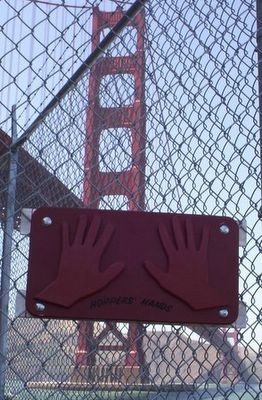 I saw a bunch of other runners putting their hands on it and of course followed suit.  (Amazing one handed cell phone pic to come later!  :) I of course had to do some research and find out who Hopper is/was and this is what I found.  I also had to get a pic because my five year old's nickname is Hopper, for obvious, literal reasons.

So two thumbs up on running in San Francisco, and bonus points for getting away from the hotel and from downtown for a brief moment...
Email Post
Labels: hopper's hands love pleaserobme.com san francisco

Unknown said…
I just love San Francisco and I've run there a couple of times and had so much fun! The marathon was hard for me but I do love running down by the wharf!
SO happy you're feeling perky again(Do guys feel perky? Maybe I should say "STRONG!"). Enjoy your trip.
March 7, 2010 at 5:50 PM

HappyTrails said…
Awesome Ace - SF is a beautiful city, if not the nicest huge city I have ever been to. The scenery along the coast is staggering - makes me want to take a road trip...

joyRuN said…
Glad you were able to get a run in at SF!

Makes me nervous when people post their trips on FB. "Anyone know a good boarding place for pets?" then "Leaving for New Hampshire for 7 days!" etc.
March 8, 2010 at 11:38 PM

The Boring Runner said…
True story.. I travel to San Jose every other week and have yet to get up to san fran. I'm a traveling consultant failure. :(

BUT - I am getting up there in two weeks!!