74 Days to Go - Summer of running and One word Fargo Marathon Race Report.

Well I mentioned the family summer vacation and there was a lot of fun in all of that.  However despite spending many hours driving, and in hotels, and in vacation rentals with faulty plumbing that spew sewage on a repeated basis, the training must go on!  Mostly. 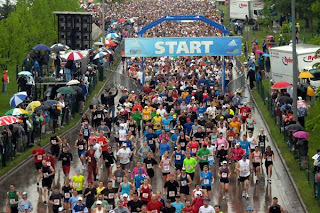 Yes there was another marathon.


That pretty much sums it up.  More detail could be categorized in this way, the Good, the Bad, and the Ugly.

Running with my sis!  Actually running with both of my sistahs.  The younger older one was running her very first marathon!  The younger younger one decided to cheer us on by running four miles with us in combat boots, also yeah!

My family was there and they are the best support crew in the world!  The five year old slapped hands with 305 runners.  I know this number is accurate because the seven year old spent his time counting.  And the three year old kept asking if she could run the marathon.  Teh wifey somehow managed this gang of hooligans, and navigated them to innumerable stops along the course.  Yeah she's the best crew chief ever.

Great job to sis on finishing her first marathon, and we got to break the tape together!  Awesome!

I didn't feel well.  Still having the respiratory infection that was going into its second week did not help very much.  Breathing was constricted, congestion pain, lack of energy, pretty much the laundry list of exactly what you are hoping for right as you go into a marathon.  Right.

Still thinking I had a chance to go under five hours proved to be rather moronic.  I went through the first eight to nine miles blazing along.  I left the five hour pace group behind without any over exertion at all.  Then it all got ugly.  No energy, little breathing, a strong urge to throw up, and a burning desire to exit stage left.  That and I wanted to find every drop of blue powerade in existence and flush it down the toilet (it was making me sick at that point.)   I think Blue Powerade is what they must use to clean all those toilets...

There was walking.  There was plotting my exit.  There was a whole lot more walking, which probably should be called shuffling.  There was even sitting on the curb of the road, in despondency.  Then I got a slap on the behind.  Not metaphorically, literally.  My awesome sis caught up and got me going.

It wasn't pretty (this being in the Ugly section after all) but I finished.  The mantra that sort of came through with some truth as I at times started to feel a little better was, "It can't always get worse."  I've heard ultramarathoners talk about using this, and it was definitely true for me on this day.  The sis and I raced in the last couple of miles and broke the tape in the Fargodome.  Final time: 5:58.  Yikes, scary.  But it wasn't a DNF.  That would have been really ugly.  Instead I got the blessing of crossing the finish line with my sis.  And that Ole and Lena, is what we call the good stuff.
Email Post
Labels: fargo marathon marathon race report vacation

Linnea said…
In other words: the best race of my life. Oh yeah... and sorry for the slap, err... slaps. Hehehe. I think I might run another one in September. Maybe just a half though considering I haven't really run since the last one. Hahaha. I love you so crazily much.
June 8, 2010 at 12:33 PM

The Boring Runner said…
Uuufff da! Stupid lungs. but you got 'er done - and that is all that matters.

HappyTrails said…
Ever been to Rampart Reservoir? Or did you have something closer in mind?
June 8, 2010 at 9:31 PM

Unknown said…
My favorite part of this post is the joy and love you shared in the running with your SISTAHs' ! You time sounds great but it does sound like this race was tough. You are tough. Well done...a tough race done with a guy with a big heart. Cool.
June 9, 2010 at 9:46 PM