The gun was off and I was running in the 50 meter fun run!

OK, so that wasn't the race, but I must say that my usual starting line jokes about "This is the 50m fun run, right?" are soooo much funnier when I do it at the beginning of a hundred mile race.  At least to me they are.  There were also a lot off "see you tomorrow"s thrown out there, which doesn't happen at every race (other than my last 5k). 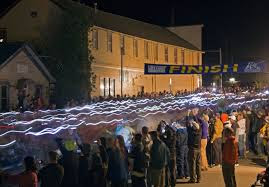 The race started and all was good with the world.  I was running.  The shin wasn't acting up.  We were going downhill.  I was surrounded by 650 crazy nuts with headlamps, how could it get any better?  Oh yeah, having local residents in their bathrobes swinging glowsticks on strings and high-fiving you at 4AM.  Right, that's better. I would have to say that the emotional feel of the group for at least the first hour or so was something akin to giddiness.  There was a lot of joking, and giggling, and making fun of people who were pulling off for "pit stops" in the first two miles.  (I'm not sure what the home owners thought of this...)  Seeing the mass of headlights bobbing, running through the darkness, and chortling about random comments thrown out by,  you know, OTHER people, was pretty fun.  The first hour zipped by.

I was feeling great at this point, looking at the stars, and the near-full moon, trying not to pass people and just enjoying the race.  I hadn't run the section of the race from the beginning to the Turquoise Lake, but I figured it was fairly pedestrian.  That is until I was watching the headlamps in front of me start going up and up and up, until it looked like everyone in front of me was being abducted by aliens straight into the sky.  That is when I realized there was a ridiculous hill in front of me.  This reminded me that this ain't your strange-smelling cousin's pancake marathon, this here is a trail race, in the mountains!  I struggled up the steep hill, (we passed a guy who was futilely trying to push a bike up it, he had to stop and try to carry the thing) and then we were at Turquoise Lake.

My pacing sheet had me trying to make the start to Mayqueen (the first aid station, 13.5 miles) in 2:28.  I hit Tabor Boat ramp which is seven miles in, at about 1:16.  Things were looking good, going good, and I must say even sounding good.  Some runners at the front of the loop around the lake, I guess it is a tradition, make strange hooting animal noises.  As the noises drift across the lake to the runners behind, it makes it seem like you are about to run into a cacophonous jungle full of rabid beasts.  This is strangely hilarious at 5 AM.  Unfortunately it wasn't long until all of those good times changed.

The section around Turquoise Lake I had run before.  It is essentially a sandy, smooth, up and down trail that goes in and amongst a lot of trees and campgrounds.  It was a little difficult following the very dim glow sticks they were using for markers, and I occasionally strayed from the path.  A couple of times I found myself at the front of a long string of runners, and since my $2 headlamp wasn't providing much light I would step aside and join the long train, just so I wouldn't be responsible for turning the race into a triathlon by leading  fourteen people straight into the lake.   This was where my first mistake started causing problems.


MISTAKE #1 - DRINKING A BOTTLE OF EVIL.

OK it was just blue powerade.  Right, like quaffing a jug of Drano will "just" give you mild indigestion.  So it wasn't really the fault of the blue Powerade, but I like to think so.  When I ran the Fargo Marathon back in May, the only non-water beverage they had was blue Powerade.  At the time, this did not sit well.    And by did not sit well, what I mean is, did not remain inside my stomach well.  This was the case here, and I started getting sick.  The most likely cause is that I was hitting the electrolyte tabs regularly, but for whatever idiotic reasons I wasn't drinking as regularly.  By the time I hit Tabor boat ramp, I should have had 40 oz of liquid chugged.  Instead, I was at more like 20 or so.  In addition my first chug of Perpetuem wasn't mixed very well and I wound up swallowing a huge ball of goo.  This, in combination with the salt and, in my mind, the evil of the blue Powerade which was in my first bottle, made my stomach start doing acrobatics. 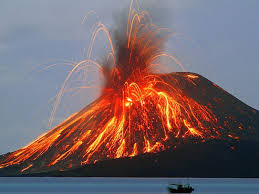 I slowed to a walk, I tried to puke, I couldn't puke, I kept stumbling along in misery, I stopped and tried to puke several more times, I still couldn't puke, then more stumbling.  This lasted for about twenty minutes.  Finally Mount Krakatoa erupted.  About eight times, plus or minus zero times.  During this process, when I was being passed by 25% of the field, I heard a couple of comments like, "Atta boy!" and "Are you OK?  Because that thing you're doing doesn't SOUND ok."  Mostly I was glad to have all that out of my stomach.  I kept trying to get back to running after the first couple of times, but running + spewing = more than a little messy.   (Reader's note, there will be no more graphic descriptions of bodily functions, for at least the next paragraph or so.  Plus or minus one paragraph.)

I basically lost about forty minutes on my pace during this time.  I also lost my nutrition and hydration plan on the side of the trail.  It was more than a little demoralizing.  I started chugging water and Perpetuem again to try and catch up on the hydration, but I knew I was already behind.  I struggled in the last few miles and hit Mayqueen at about 3:00.

The crew was outstanding!  My plan was to spend two minutes or less at the aid station (quick by my standards for ultras and all-you-can-eat buffet lines).  They had me sunscreened and bodyglided up, bottles and pack refilled, full of encouraging lies ("You look good!") and out of there in under two minutes.  I knew that statistically my chances of finishing the race when coming in at MayQueen in three hours is infinitesimally small (kind of like the size of my optimism at that point), but I wasn't about to quit.  There is no real cutoff at Mayqueen, but I was basically already within fifteen minutes of the cutoff, when I should have been forty-five minutes ahead.

I turned out of the campground and started running again.  It was time for the first big climb of the day, up and over Sugarloaf Pass.

And no, the race doesn't take place in Candyland...