Race Report - Leadville Part 3 of 3, No really, I end it this time

Heading out of Mayqueen, once I hit the single track I actually started to feel better.  The sun was coming up and just feeling the warmth brought back some life.  I had run this section before (at least until I lost the trail on a training run) and felt pretty good.  I knew I had to make some time up so I was pushing the pace and actually passed a couple of people in this section.  The first few miles are really fun single track on the Colorado/Continental Divide trail.  After that, you hit Hagerman road which is a long gradual incline that takes you up to the trail which takes you over Sugarloaf pass.  I actually felt pretty good on this section.  I was power hiking up the hill and felt like I was making pretty good time.  At one point as I approached the top I looked back and could see all the way to the start of the race, past MayQueen, past Turquoise Lake it was a beautiful site.  I actually was pretty happy at that moment to be right where I was, running the race and just being in some wonderful mountains.

If the trip up was my moment of enjoying Leadville, then once I reached the top my racing brain reminded me that I needed to get a move on.  The cutoff was going to be tight and I needed to make up time.  I did NOT want to have my band cut at Fish Hatchery for goodness sake!  The run down was tough. Very steep sections along  the course and my feet were starting to hurt.  Not blisters or rubbing just swelling a bit.  It was a little disconcerting because I was only twenty miles in or so.  This section more than any I felt like not having run in four weeks was contributing to bad feelings and probably mostly my mental state.  Some of the downhill on this section was hard for me to even run do to its steepness.  Once I made it off the hill, I started looking for the Fish Hatchery aid station which we had visited the day before.   It was one of those times where you keep thinking "its got to be around this corner!" and then it isn't.  Rinse and repeat for another mile or two.  I was on paved road and a long straight section when I finally saw someone walking towards me.  It was a race official with a radio.  This fully engaged my freak out.  I was getting close to the 6 hour cutoff for Fish Hatchery, what was going to happen here?  As I approached he looked at his watch a couple times and shook his head at me.  Finally as I was passing by he said "You are right on the cusp of not making it.  You have 1.5 miles to go and a couple of hills.  IF you run HARD the whole way you MIGHT make it."    My response?

Oh and then I remembered how crappy I was starting to feel.  However there was no choice, I was not about to quit and not about to let them cut my band.  So I ran, HARD.  I wasn't moving fast, but it felt like an all out sprint.  As I approached the entrance to the aid station one of the crew was there walking towards me and yelling.  We had coached many years together long ago (wrestling) and I knew by the look on his face what kind of response I was going to get.

"COME ON ACE YOU NEED TO GO NOOOOOOOOWWWWWWWW!!!  GET MOVING!  YOU NEED TO RUN!  FASTER!  MOVE IT!!!!"  I paraphrase.  It was just what I needed.  I was totally anaerobic/red line at that point and wanted to die, but he and the other crew got me through the finish line in about two minutes under the cut off.  I went through the aid station and medical check (optional I guess at that point because I just walked past,) and they "crewed" me up.  What an awesome crew!  Once again I wouldn't have made it without them.  I ran the last 1.5 miles in under 10 minutes / mile which is smoking for me.   I asked the crew when I made it, "Did I just sprint 1.5 miles so I could go another two hours??"  Their response was "Yes now hurry up!"

Next up was the long straight stretch to Half Moon II aid station.  This section was a mental battle.  The first part is the most boring part of the course, a lot of it on paved, flat roads where you can see out through the entire valley.  I was struggling mentally here to be honest.  My body was hurting, a lot more than I thought it would at this point.   My shin was acting up (though in a different spot) and another cutoff was looming.

I wanted to give up on this section, but I don't think I gave in.  After the fact you look back and ask, "couldn't I have gone faster/done more?"  but at the time I was doing my best.  I was running and walking trying to cover distance.  Mentally I was literally having yelling matches with myself about my pace and continuing on and not giving up.  The people along the way I'm sure were rather disturbed.  The crew met me at Powerline which was a huge help.  The race hits a dirt road at this point and gets back next to the trees.  I had about three miles to go and about forty-five minutes to do it.  The crew encouragement was huge.  I believed I could make it.  Despite having a shouting match with my mp3 player which I was wearing at this point, I was moving on out.  Not long after this, I unfortunately made my next mistake. 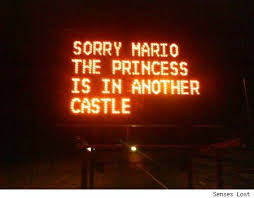 Yeah so I ran right past a turn off.  Whoops.  I was cruising along and looked up and found myself at a four way intersection WITH NO COURSE MARKINGS.  Oh no.  This is not good.  I had no idea which way to go.  I looked on my map and directions, and saw the sign for the Forest Service road I was supposed to be on and started following it.  Still no course markings.  Then I hit another intersection and saw some course markings.  Sweet, I thought, back on the course.  At least I was happy until I saw someone shuffling towards me.  As I got closer I realized it was a guy I HAD PASSED THREE MILES AGO!!  I WAS GOING THE WRONG WAY!

AIIIIIIIIIIIIIRRRRRRRRRHHHHHGHHHHHHHHHHHHHH.  Complete demoralization.  The guy I now met had totally given up and been shuffling and barely walking just past Fish Hatchery and now I had wasted at least a half hour and probably 2.5+ miles going off the course and at times in the wrong direction.  The cutoff time came and went and a race official in a truck came by and told me I was out of the race.  Even the dejected walk of shame brought me back in about 30 minutes past the cutoff.  Just under the amount of time I had wasted being off the course.  To add to that frustration, I talked to a lady in front of me who told me she had seen me go past the turn off and was screaming at me to come back, but I had my mp3 player on and didn't hear her.  *sigh*  I also learned later that several people missed a turn in this area.  The course markings were there, but I would say that  they were not always clear, at least in my stupefied state.  I'm going to ask for giant flashing neon signs so I won't miss them next time.

So there is my race.  33 miles or so in 8:30.  The crew and everyone was waiting for me at Twin Lakes and so they had to radio ahead to tell then I had been forced out.   Disappointment.  Feeling like I had let everyone down was very tough.  Perhaps I will ramble on about the philosophical implications at some point, but here for a way to wind it up are my

Top Ten Things I Learned from a DNF at Leadville

1.  God is Good and His Love endures forever.
2.  Having good friends to help me, even in my craziness, was priceless.  (Though they refused to apply Body Glide to my "nether regions")
3.  You must dare to believe in order to have a chance of success.
4.  It hurts more to fail, when you dare to believe.
5.  I know a little bit better about what it takes to finish this race, and I didn't have it on this day.
6.  I'm still crazy enough to think I might be able to work hard enough to have what it takes.
7.  Consuming too many salt tabs without enough water, when you aren't sweating a lot to begin with = "shouting at your shoes"
8.  My wife is amazing.  (Did I mention she did all this crewing and planning and organizing while she is eight months pregnant?  uhh yeah, hard core.)
9.  I kept my promise not to quit.  You look back and always say, "could I have done more?" but I gave my best effort at the time.
10.  Did Not Finish stinks.  But as Try Running pointed out, Did Not Start is worse.  I trained hard, toed the line, and gave it my best shot.  Now it is time to regroup, reload,  and.......try again?