No, I haven't received a Driving While Intoxicated.  I haven't been pursuing a run on Dancing with the Stars by, Dancing With Intensity.  And despite the many signs I also don't fit the demographic category of Dumb Whitey Inbreds. 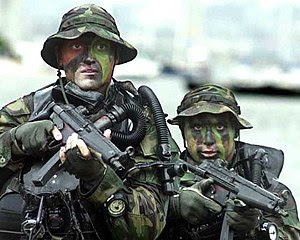 Image via Wikipedia
Instead I was reading through some random news articles and I was reading a story about Navy Seals.  A team of Seals was conducting an informational and inspirational talk and were describing some difficult situations during a recent deployment to Afghanistan.  The term that they commonly used in describing how they pushed through the ridiculously hard challenges was DWI.  In this case DWI stands for Deal With It.  There wasn't a detailed methodological formula as to what this meant.  None was needed.

It caused me to think about the fact that, too many times when faced with the inevitable difficult or challenging situation we come up with far too many excuses, or complicated plans, or overreactions based on fear, or rationalizations or just plain analysis paralysis.  I think running is like that.   We can either linger on the fear, uncertainty, and doubt, or just keep trying, keep pushing, keep running.

Around the same time I was reading a race report from Ryan Burch about the Run Rabbit Run 50 miler around Steamboat Springs, CO.  Apparently the weather turned bad, and the wind and rain and sleet and snow and hypothermic temperatures made for a rather challenging day.  But what I liked about Ryan's description was that there was no internal dialogue about quitting or making excuses or wishing he had brought different gear.  The bottom line was, deal with it and finish the race.  Which he did.

Haven't pushed away from the Godfather's buffet early and often enough?  DWI

Plagued by fears and doubts that you will never achieve your dream?  DWI

Made mistakes, failed over and over, got knocked down and don't want to get up?  DWI

Miss out on the Lombardi trophy and need something to do in the offseason?  DWI