Run Rabbit Run year one.  I have a few attempts at first year ultras under my belt now.  I hit the first running of the Cheyenne Mountain 50k and the North Fork 50, and now the Run Rabbit Run 100.   There are always some interesting things that come with running a "first time" event.  Run Rabbit Run has had a 50 mile race for several years so it wasn't totally new organization-wise, just the first time for a 100 mile event.

The Short Version: I was intentionally slow to start.  I got slower.  The course was hard.  Everything blew up.  After being allowed to continue past an aid station for which I had missed the cut off, I went three miles and turned around and came back and dropped.

I was initially attracted to trying this race for a couple of reasons.  First of all, the last few years after missing cutoffs at Leadville, I always felt like I wanted to try again right away.  I was after all in decent shape and felt like if I had more time I could have kept going.  Secondly and in conjunction with that I wanted a 100 with a little more generous cut offs.  Thus the Run Rabbit Run 100 fit the bill, a month after Leadville, 35 hours for the cutoffs, in Colorado, sign me up.

Turns out there were a few flaws with my reasoning.  First off, this was the hardest course I have attempted.  And I didn't even get to all of the really hard stuff.  The way they had the course marked, it wound up being between 110 and 115 miles, depending on who you asked.  I hit a couple of sections that were straight up Steamboat ski hills.  No cutoffs, no trails, just get your rump up the hill.  Then the whole injury/very little training did not help things.  Bottom line however, was I was not in good enough condition for this kind of challenge.  Yet.


Here is a picture from the beginning.

The first five miles were straight up a ski hill.  To the tune of 3300' of elevation gain.  It took two hours.  I was pretty happy with that time.  Mostly I was trying to not max out my heart rate and go at a slow steady pace.  After reaching the top, it was a fairly easy rolling section over to Long Lake.  I was going slowly, but not so slowly that I was off pace for the cutoffs.  Everything was proceeding as planned up to this point.

I will mention that during the section from the top of the hill to Long Lake I performed a magic trick several times.  The magic trick was teleportation.  Namely, I kept jumping magically ahead of several different groups of runners.  Now this was not due to me passing them with my superior speed (snicker.)  However several groups of runners passed me repeatedly during this section.  The reason behind the trick?  Trail markings.  Or rather the lack of them.  Several groups of people of all types, tortoises and hares, kept getting lost.  This became a noteworthy issue in the blogosphere and here is my take.  YOU HAVE TO MARK TRAIL JUNCTIONS!  When you get to a cross roads and there is no marking as to where to go, that is a problem.  And that happened repeatedly.  When I got to a couple of aid stations I politely suggested that there were several places that needed to be marked.  To their credit the volunteers did their best to correct it.  However many people including elites got lost repeatedly.  The other problem with the marking was that they used yellow tape, and with the golden aspen leaves, some markings were hard to see.  Additionally marking a trail turn 200 yards from the crossroads, around a corner isn't really helpful.  I'm sure this is something they will address next year.  It is a tough job to do course marking for a 100 mile event!


After Long Lake was a long six-seven mile (that turned out to be more like ten mile) section that I was planning on making up some time on and increasing the margin between the cutoffs.  Yeah about that. They had mentioned in the pre-race briefing that going down fish creek trail was a bit "gnarly" and that you should "be careful".  This sort of had escaped my notice at the time, but it came flashing back as I hit some really rocky terrain.  There would be no bombing down the hill on this section.  It really was difficult to even "run" in many places.  I actually maintained my desired 35 hour finishing pace through this but due to miscalculation on the length of the leg (it was about 3 miles further than advertised,) I ran out of water about forty minutes before the cutoff and in the heat was suffering a bit.


The fam' met me at the high school and gave me some great encouragement.  Next there was a quick jaunt through town, and I do mean through town.  I actually had to stop at a stop light!  Imagine that, waiting for the light to change in the middle of a 100 mile trail race.  It was pretty comical.  Then it was on to Olympic hall.  Once again there were some sections, even in town here that were not marked.  I actually had to stop a car and ask which way to go to get to the next place.  Crazy.  After leaving the aid station, I walked outside (the aid station was inside a building) and didn't know which way to go.  I looked back inside and the volunteer at the aid station pointed up.  As in straight up.

Yeah about that.  This I did not do well on.  I REALLY struggled trying to get up this stinkin' hill.  My heart rate was maxed, I had to keep stopping to try and catch my breath.  At several points the grass was slick and I was on all fours grabbing on to tufts of grass to pull my sorry rump up.  I strained my foot again pretty good on this section which didn't help much from this point on.

Once at the top the meltdown really went into high gear.  After getting up the hill I was faced with another long uphill section.  I really did not do well.  I think I was probably extremely dehydrated at this point.  There was puking.  There was wooziness.  There was despair and gnashing of teeth.  There was just sitting on the side of the road wishing I was somewhere else.  Ugly.  I slowly ambled up the hills.  At this point I started getting passed by the elites.  I didn't care.  I got passed by bikers having marital squabbles.  I didn't care.  They asked me for directions.  I had no clue.  On a related note, many of these trails had names and signs.  The one we went up was called (no lie)  "The Lane of Pain".  Seriously.  I really had nothing left at this point.  Mentally beat.  Physically beat.  Loss and failure.  But I kept moving forward.  Not sure why.

I got to the point where I was finally hitting the descent into Cow Creek and was sort of feeling a bit better.  At least the puking had subsided a bit.  At this point I let the mental defeat linger.  I probably could have picked up the pace but I didn't.   I look back and wish I had pushed it a bit more.

I knew I had lost a ton of time and would be past the cutoff.  But I also knew they would be somewhat relaxed at this aid station, per the Race Director.  Still, I had no intention of continuing.  The knee and foot were very painful at this point and I was moving so slowly. 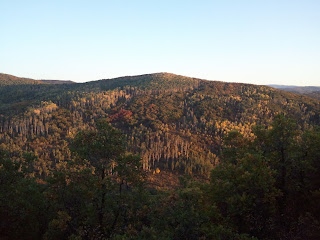 However, my awesome crew aka the fam' had other ideas.  I came into the aid station and their encouragement was off the chart.  I had to do some significant blister work at this point, but I got some food, put on a headlamp, wrapped multiple appendages in duct tape and with the help of some people who love me I headed out into the night.

I ran down the road for a few miles, felt ok, and then my brain started working.  I was looking at another ten mile section with another one of those Lane of Pain type five-six mile, 2000' climbs.  I knew the last segment had taken 4.5 hours?  and I was already only 1.5 hours from hitting the official cutoff.  I also had far too little water to last that many hours.  Too much thinking.  This was a mistake on my part, I should have just plugged on, but I gave into the hopelessness, and the barking of my leg and turned around and tapped out.  It's easy to look back after the fact and say that was a really dumb thing to do, and it probably was.   However at the time, it always seems very sensible.

Thus my event was over.  I covered about 37 miles in a very long time of 13 hours and change, over what I feel like was an extremely difficult course.  Easily the hardest race I've tried.  I also realized that I had not done sufficient preparation for something like this.  I have a much better idea of what it would take, and know enough that I still have a long way to go.

Thanks to the fam and my amazing bride who enabled me to go a lot further than I would have all by myself.  She put up with kids and waiting and a whiny runner.  Talk about love.

Unknown said…
You are tough...this race sounded excruciating! At least it was as gorgeous as it was challenging, that kind of makes up for it! Beautiful pictures!
October 10, 2012 at 6:19 PM

HappyTrails said…
That is an awesome patch of Creation up there Ace - can't think of many places prettier to run! Did I mention the fact that you are incorrigible, and on top of that a glutton for tremendously difficult adventures??? Keep it up - hope to run into your clan soon :)
October 15, 2012 at 6:50 AM